Last but not least, the third part of this wonderful trip around the Latvian world of folktales.

29th April
After a day of rest with Māra Mellēna, who shows me the city and discovers me many details from Latvian folklore and traditions, on Monday morning I take part at one seminar organized in collaboration with the UNESCO National Commitee in the project ‘Storytime in libraries’, which brings together librarians from all the country. The Lingua franca will be English, and I count on the help of Aldis Pūtelis, a brilliant storyteller and translator, who will translate my words from English into Latvian. Before joining the Seminar I talk a bit with Aldis, to give him some clues for translation. I also tell him about the stories I would like to tell during the seminar. From one story to the other, finding differences and similarities in folktales, he talks me about the water spirits, very present in Latvian folktales. Absorved by stories, I have almost forgotten we have to join the group at the seminar. 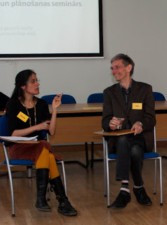 The group seem a bit shy to ask at first, but stories help to make people speak, and then very interesting topics about storytelling show up. It is really a pleasure to tell «The Stone Soup» with Aldis: he tells the story in Latvian with such grace and rhythm, and suddenly we are telling the story in two voices, performing a duet where two languages and two ways of telling meet to create something new. People seems to be having fun; so do I. It is great to hear the echo of a story you have told many times in a such musical language as Latvian, looking for similarities, guessing words… 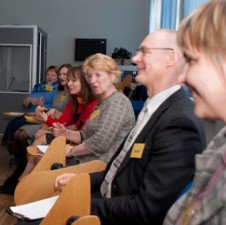 After that, the representative of the Ventspils library says «Mi mother was in Kuldiga at the Ziv Zup festival and she told me that story by phone yesterday, she saw you telling it at the festival!». It seems that oral transmission still works, after all; and even faster, thanks to technology.
During the seminar I also tell «The black chicken», and Aldis also adds a funny touch to the tale with his particular style. I sincerely believe that this can be the future for reviving storytelling in our multilingual society. With subtitles or powerpoints of translations you have to face the eternal dilemma: to look away the storyteller and miss the expression and body language, or simply ignore translation and loose the meaning of the story. But all this becomes unnecessary in front of a storytellers’ ‘duel’, with words instead of swords. The swap from one language to another becomes an art, and the listener can marvel at his own language, as well as enjoy the unheard sounds, the music and the beauty of an unknown language.

After the seminar, I have a short time to buy some Latvian music and visit old Riga again: the streets show me traces of the different peoples that inhabited them. Aldis discovers me some secrets of the city: a statue in a roof, an old legend, the misunderstandings hidden in the street’s names, many of them due to a translation error from Mittelniederdeutsch, the German dialect spoken many years ago:  Siļķu iela, «Herring Street» (Herringstrasse) should be Kungu iela,«Lords Street» (from Herrenstrasse);  Peldu Iela, «Swimming Street» (Schwimmstrasse), should be called Cūku iela, from Schweinstrasse, «Pigs Street». 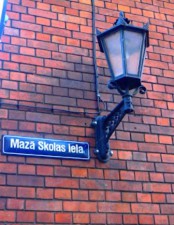 And so on, from one misunderstanding to the other, each more funny than the other: all my translation colleagues will be delighted.
In the afternoon I am invited to take part to the Gala organized by the Academia de Cultura, I tell two stories in Spanish without translation, as most of the audience studies Spanish. It is amazing to hear them speak Spanish with an accurate accent. Maybe the music of Latvian language has to do with it… I feel sorry, as I can barely pronounce Liels paldies… Latvian and Lithuanian are the last two languages with indoeuropean archaic roots that are still alive. And I can say Latvian is a very lively language, very present in the daily life. 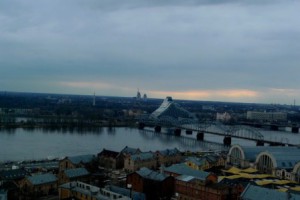 It has been a long day, it is time to go home. I feel really home here. But after returning home there is another big surprise for me: Guntis invites me to visit with Māra the Archives of Latvian Folklore, located in a massive building from the soviet time. From the roof you have one of the most splendid views from Riga.

And after admiring the landscape, I can see the archives: typological indexes from folktales, folksongs… In a cabinet, sorted in green boxes, sleep all collected legends, many of them unedited: there is still a lot of work to be done.  This job requires a lot of time and patience. Guntis knows it very well; as he has spent many hours of his life here.

And then I enter the treasure chamber: 3 million of folklore items, included songs, legends and stories, sleep in this room. They show me one of their most precious national treasures: the Dainu Skapis, the cabinet of folksongs, a card catalogue designed and created by Krišjānis Barons (1835-1923). This catalogue includes all the folksong manuscripts Barons collected for the edition of Latvju Dainas, the most significant publication of Latvian folksongs (217.996 texts in 6 volumes).

This folksongs, in form of quatrains polished and perfectioned over time, passed through generations by word of mouth, and condense the poetical and mitical essence of the collective imagination of this country. In these little drawers, placed in cigar boxes (Barons was a hardened smoker), thoroughly sorted and numbered in little pieces of paper, as paper was scarce, I can see how folksongs sleep, ready to be sung at any time. And I am sure they are sung from time to time, as I have seen it during these days.

The value of this archives transcend the historical or academical value, they have a particularity that suddenly makes me understand why Latvian people loves them so dearly. In this archives has been also registered where and when each song was sung, and also who sung it. That means that anyone can come here and find out what was sung in his family, by his ancestors, or they can even see manuscripts, hear recordings or see photos from distant relatives…

Relatives that they would have never be able to meet, as they belong to the past, but thanks to this archive they can bring them to the present, share something with them, meet them. This archive makes possible the impossible, connects the past with the present and gives the possibility to hand down oral tradition again, enriching and developing it, making it present and alive. Leafing through albums of photos from thousands of informants, reading their names and places of origin carefully noted next to each photo, at home, before their houses, in their land, I feel really touched.

After visiting where do stories live in Latvia, it is time to go back to Barcelona. It has been a short trip, but full of discoveries and learning. I go back really inspired by all what I had the fortune to live and experience in Latvia, a country that offers dozens of stories to everyone who goes there willing to listen. A country that now I can locate without hesitation in the european map; far north, in the Baltic shore, and also here, very close to my heart.

If you want more…

A little report about Ziv Zup festival from the local TV.

Music from Laima Jansone, a young and brilliant kokle performer.